Jeff Snyder is a composer, improviser and instrument-designer living in Princeton, New Jersey. He is the Director of Electronic Music at Princeton University, and the Director of PLOrk, the Princeton Laptop Orchestra. As founder and lead designer of Snyderphonics, he sells his unique electronic musical instruments.

Jeff: There are a few motivations. Partially, I am interested in exploring several different types of musical interfaces, and I want to understand what design choices are connected to the different interactions these interfaces allow. For instance, I do not play a woodwind instrument, but I created the Birl, which is an electronic version of a woodwind, so that I could gain some understanding and knowledge of what is important to a player about how those instruments function.

I also am interested in the design challenge of thinking about how to make something that visually appeals to me in different instrument paradigms. In the case of the Birl, I think there is something challenging about making an electronic wind instrument that does not feel like a toy or recall not-so-cool jazz fusion aesthetics. What would distinguish it from the existing commercial instruments in that world (EWI, Yamaha WX series) in both form and function? Based on these kind of interests, I tend to get excited about trying my hand at some other instrumental interface concept every couple years — right now I am working on something that springs from the pedal steel guitar performance interface.

As for the more acoustic side of things, I have never been fully satisfied with the sound-from-speakers aspect of electronic music. Drawing inspiration from musicians like David Tudor, I would like to make “the thing that vibrates” have more physical body to it; more life that the performer can feel. The downside of using an acoustic resonator to transmit electronic sound is that it colors your electronic signal in an inalterable way — it stamps it is fingerprint on everything you play. But I like that. I have a goal to create instruments that have identifiable sounds — like how you can listen to a recording of a cello, a Hammond organ, or a trombone, and know immediately what instrument it is. I would like to resist as much as possible the “any sound you can imagine” concept in electronic music to create instruments that live within a restricted sound space, but give the user enough control that this restricted sound space is endlessly expressive. Kind of an unattainable goal, but it is something I aspire to, which guides choices I make.

Jeff: I play some of my instruments myself, but not all. My primary instrument is something I built in 2010/2011 called the JD-1. It is a keyboard/sequencer controller that I use to control a small compact modular synthesizer I built. I have been playing it in all of my improvisational performances for 6 years now, and I find it allows me the kind of quick control that I need in an improvisational context, and it feels like it responds wonderfully. For the last three years, I have been learning to play pedal steel guitar, and I am beginning to incorporate that into my performances as well. As of this year, the MantaMate and Manta have joined my rig, since I am really delighted about the functionality that I built into that combination. This pushes my portable setup beyond something I can carry on New Jersey Transit or the NYC subway, so now I have a “larger” rig and a “smaller” rig depending on how I need to get somewhere. 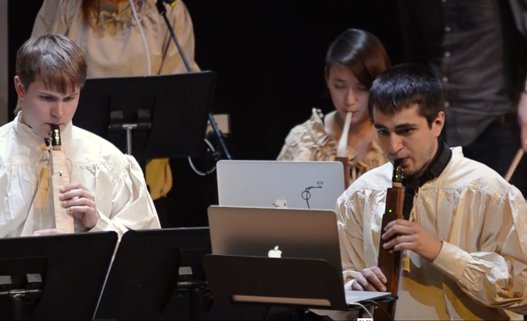 Other instruments I have created, like the contravielles, birl, drumbox, and feedback trombone, are not designed for me to play, but rather are focused on taking advantage of instrumental skills that other performers have. I write music for them, but I do not play them personally. I think of these as instruments for my growing orchestra, kind of like Harry Partch’s ensemble of instruments. Over the next several years, I hope to create something of a repertoire of music written for them that could be toured around, though the economics of leading an ensemble like that may never become sustainable for my situation. These instruments are built with the needs I have as a composer (microtonal precision, sonic identifiability) rather than the needs I have as an improviser/performer (quick access to a wide variety of techniques so that an appropriate timbre can be found for the current context).

Till: Since I think we agree that it is difficult to put music into genres, could you explain what it is like to hear/perform your music? Is it possible to give us examples of your pieces the outline your insterest as a composer?

Jeff: I like the question! For most audience members, I imagine my pieces would generally involve instrumental sounds and pitch relationships (intervals) that are unfamiliar to them, mixed with moments that spark recognition. Part of what I am aiming for is something that sounds a bit alien, more like a distorted mirror of our world. Sometimes my works aim to sound non-composed, like they are found objects from which the creator’s full intent is less than clear. However, I am not looking to create something “completely new” or without reference points — it is not a Modernist aesthetic. Rather, I like to allude to things, but in a blurry way. An example is my piece Undeciphered Writing. I wrote it for an ensemble of instruments I invented, including the Contravielles, Bass and Resophonic Mantas, and Forceboxes. The form is very unusual, with much of the activity happening in the first third of the piece. I imagined the piece being structured like a fragmentary relic of an unknown language. There is tonal reference in the material, but it is not functional.

My new album Sunspots, which is being released in January 2018, is conceived not as a self-contained record, but instead as part of a series of works in different media. I created several textures that are designed to feel “undirected” or representative of emergent behavior rather than omniscient design. It is being released both as a dual vinyl LP, in which is will of course be fixed media that is the same each time you play it, and also as a web art piece, which is generative and is never the same when you visit it again. On dual LP version of the album, the music is divided into two records, one of which contains active, dynamic textures, and the other of which is just two 18-minute harmonically static textures. On the active record, there are sounds that appear on one side, and then return on the other - I think of it as though I am creating some different sound environments that you can stick your head into and listen for a while. The fixed media version is one possible trip through those environments, which includes returning to earlier locations to check on the developments.

Till: Do you improvise as well? What kind of (inter)relation with your playing partners is crucial for you in an improvisation session?

Jeff: The most important thing for me is that the other player is a careful listener. I have several musicians that I love to improvise with, including Sam Pluta, Federico Ughi, Daniel Carter, Cenk Ergün, Leila Adu, and Quinn Collins. One thing that they have in common is that they all listen intently while playing and are able to be anything from subtle to extreme. 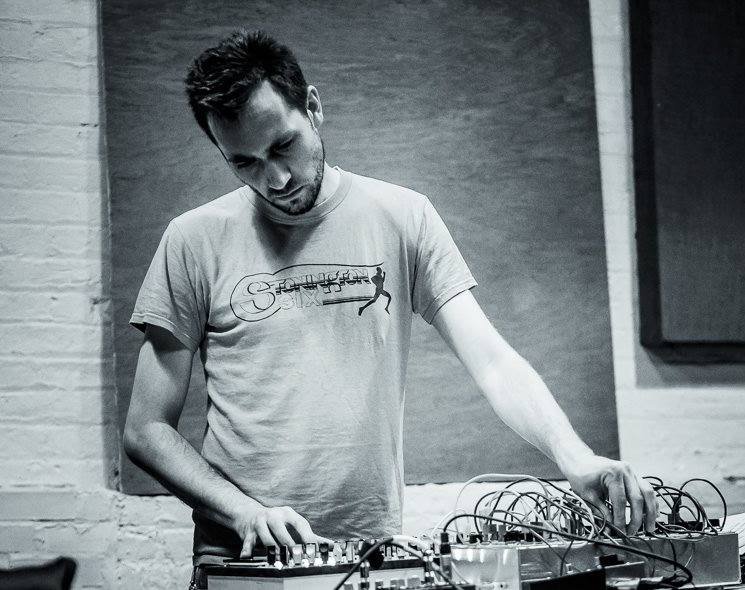 With Federico, we often perform without discussing plans ahead of time, and I like that we are often able to create compositional forms together improvisationally, often returning to earlier material later in a piece. When someone is really listening, they can make wonderful decisions about how to respond to what they hear — whether by joining it or imitating it, contrasting it, ignoring it and remaining independent, pulling it in a particular direction, or following where it leads.

Till: Together with AGF, I recently introduced the term SIW (Sonic Intervention Wilderness), a term that describes making music in an environment that is not typically seen as a place for music. Two very different examples are e.g. a nature trail in a National Park or the waiting lounge of an international airport. If you’d be invited to perform such a Sonic Wilderness Intervention, what kind of environment would you choose?

Jeff: That is a fun idea. I would love to do a performance somewhere with an interesting natural reverb, such as a cliff with unusual reflections or echoes. It would be fun to create a site-specific performance that played off of natural features like that. Kind of like Pauline Oliveros’s use of a cistern, or Zbigniew Preisner’s use of an abandoned salt mine. 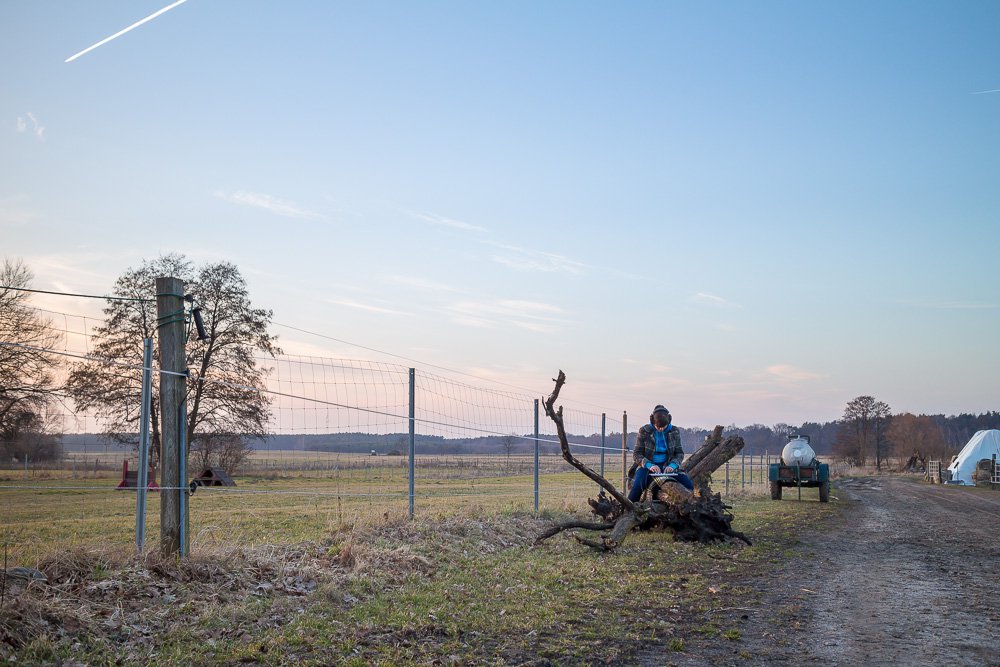 Till: What kind of audience would you expect? What music would that audience experience?

Jeff: Well, mostly I would expect an audience of small animals, perhaps experiencing a subtle variation of rhythmic patterns that use the natural echo. I wonder if they would enjoy it.

Till: If you would design an instrument for such a performance, i.e. playing rythmical patterns within the natural reverb of a cliff, how would it look like? Would you also build a custom resonator for it?

Jeff: I am not sure, but perhaps something that was not electronic in the first place would be nice, like something robotic — that could be strong impulse-like percussion sounds…

Till: Thank you for your thoughts!

I met Jeff the first time when he was a guest at the 3DMIN project where he taught a workshop on capacitive sensing for instrument design. Related material can be found here. His work, most prominently the Manta controller and its specific hexagonal layout, significantly inspired my own approach to instrument design and music performance in general.

Jeff also wrote a chapter on his development strategies around the *Birl that was published in the 3DMIN publication on Instrumentality in the 21st century: Identities, Configurations, Practices.* 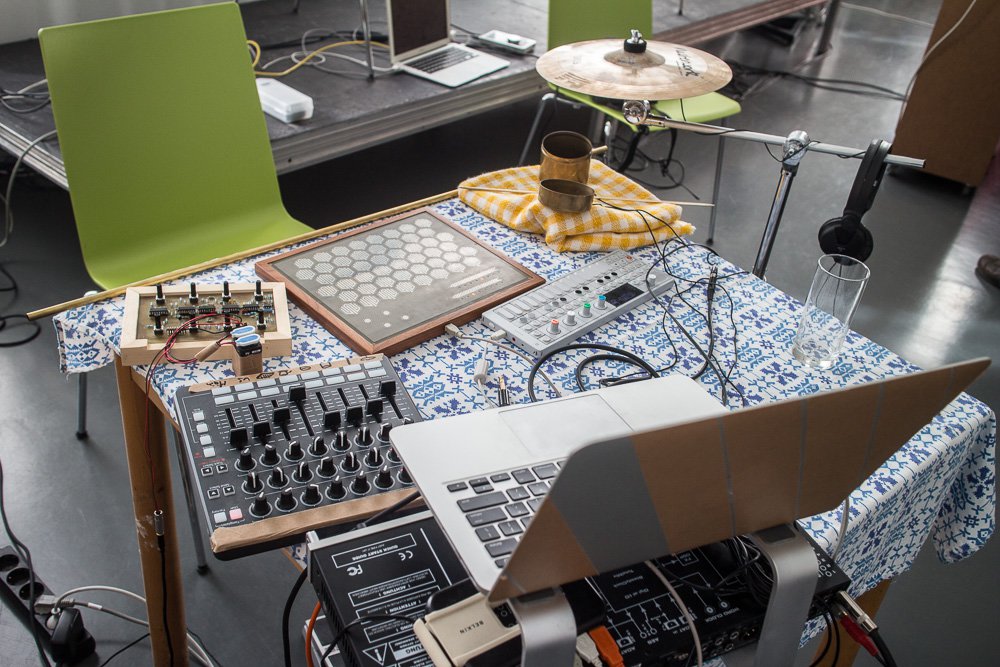